One thing we didn’t have to deal with in Nevada and never had a problem with was rodents, whether it be mice or rats. Here in the Northwest, they are much more abundant and will get into almost everything.

Not long after getting into our house we noticed that something was chewing on the insulation on the firewall of the truck. Of course I turned to Google to see what I could do to deter the vermin. There were many ideas, but none seemed to be 100% guaranteed. The easiest one was to leave the hood up reducing the protection and not giving them a safe dry place to stay. Another way was to spray peppermint oil in the engine compartment which was supposed to deter them. I bought the oil and used it, but it didn’t stop them. I needed to do something as I didn’t need them chewing up the wiring and causing thousands of dollars in damage. 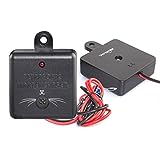 I looked on Amazon for rodent traps, etc. and saw that ultrasonic controls were pervasive. None had five stars meaning that everyone was happy with them, but some were rated better than others. I decided on the VENSMILE Under Hood Animal Repeller Car Rat Repeller, Fireproof Rodent Repeller for Car. The unit wires directly to the battery terminals, as you want it to run at all times, especially when the car is parked.

I placed one of these on the truck, both cars, and the motorhome. It’s ultrasonic, and the human ear cannot hear it so how do I know if it is really working? The iPhone app store to the rescue. I downloaded an app called “Audio Spectrum Analyzer” by Black Cat Systems. I think it cost $0.99. Once downloaded and opened, and placed near the ultrasonic controller, you can see a wave go across the screen showing that there is indeed sound coming from the unit. Since installing these on all the vehicles we have not seen any indications of rodents. See video below on what the ultrasonic wave looks like on the iPhone app.

Fast forward to a few weeks ago when Alicia bought a used car, a Mazda Protege. The first week she had it I opened the hood a few times and was checking the fluids, etc.  I noticed that her battery terminals had some corrosion and decided to clean them. I removed the terminals to clean them and noticed that both of them were cracked and needed to be replaced. Luckily, Alicia had flown down to Reno for the week to be with her friend, so there wasn’t a rush to get the car working immediately.

I picked up a couple of new terminals to install on the weekend. That Saturday when I opened the hood to do the replacement I noticed a bunch of twigs, etc. on top of the engine, like something was building a nest. Oh no, those damn things were looking for a new home! Luckily, I bought a few extra ultrasonic controllers so I installed one after replacing the battery terminals. I think these things really work, as there hasn’t been any activity on our cars, but they got onto hers right away after arriving on the scene.

These things only received 3.4 out of 5 on Amazon, but they seem to be working for us.